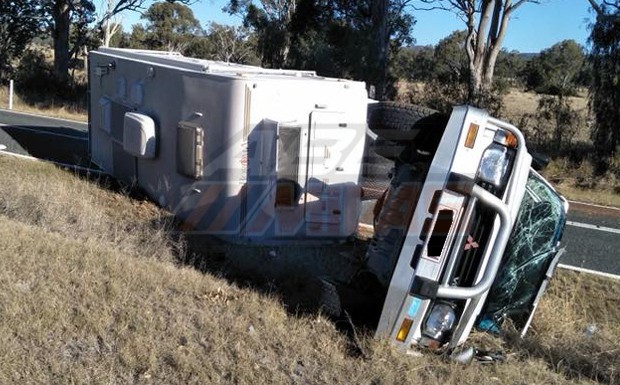 A double pendulum is one pendulum suspended below another.

When either pendulum swings beyond a minor angle specific to each’s length and mass, both pendulums quite suddenly interact in a manner called chaotic motion. Not quite as the name implies, chaotic motion can be predicted, but only by knowing the exact triggering circumstances at virtually atomic level and via hugely complex mathematical equations. Let us just say for now that the behaviour of a double pendulum is random-like, but not random.

A tow vehicle and trailer, when subject to external forces, behave like a horizontal double pendulum. By being on the ground, due to the force of gravity on the rig’s tyres’ footprints, their friction on the road surface dampens the action. The effect is not as intense as the vertical pendulum, but the principle is the same: yawing (swaying) or pitching of either the tow vehicle or the trailer determines the movement of the other. The effect of these mutual interactions is unpredictable, excepting that the consequences for both tow vehicle and trailer is jack-knifing, and usually a roll-over.

The double pendulum effect when towing is always due to the combined interaction of many factors. The major ones include the relative weights of the tow vehicle versus the caravan, the distance of the tow hitch from the vehicle’s rear axle, and the tow ball mass: all in association with external influences such as gusting side winds, overtaking too fast, a change in camber, veering off the side of the road or steering overcompensation. Excess speed is always a major factor.

The energy needed for chaotic action to occur here is the kinetic energy of the moving rig at a speed unique to that rig, its manner of loading (and particularly the tow ball mass). A rig does not have an accident if it exceeds that critical speed, but if disturbing forces are strong enough to trigger that chaotic pendulum interaction, that rig almost always develops a non-controllable escalating snaking terminated by jack-knifing and usually rollover.

In millions of the tightest controlled simulations of double pendulum chaotic action, never once has their interaction followed the same sequence: each event is unique!